Tippelbruder - the secret is out! 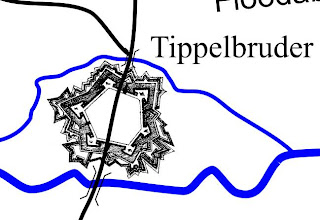 Recent sabre-rattling and veiled threats about Tippelbruder from the new tyrannical egomaniac in charge of Stagonia, Ludwig the Louse, means that it is now time for massive changes in Tippelbruder to become public knowledge, partly to show that any tyrant foolish enough to try another attack on Tippelbruder will have an even harder time than the last idiot. Contributions from a wide and admiring public throughout Europa as well as vastly increased revenues from tourism and trade have allowed the Tippelbruder Town Council to instigate a massive programme of improvements to the defences of Tippelbruder. The old mediaeval town walls have been swept away and new, up-to-date defences created. The attached picture shows the state of the walls of Tippelbruder itself - the outer defences, still being constructed, are more of a state secret but no doubt evidence of their nature will eventually leak out.

Come on, Ludwig! Come and get a bloody nose, just like your late unlamented predecessor!

All of europa will rally around our allies in the frei state...Reich Duke Wihelm von Beerstein

Hurrah for Tipplebruder. Hesse-Engelburg stands ready to again send troops to its defense should Stagonia try another aggression.

Invested in PaperTerrain's new star fort, have we? Good for you. Anything to deter the vile Stagonians is a good expense.

How dare you say "unlamented" about Maurice the Vile's death . . . I distinctly saw a rat cry. Indeed I wouldn't be surprised if many vermin wept . . . although certainly no human did.

Formidable! The Soweiter League pledges to send some aid in defence of Tippelbruder if the need arises!

As for Koenig Maurice, some say there were a few tears shed by a certain boar housed in the Soweiter National Zoo... although, that could've had something to do with the onions mixed in with the hogswill...

WHile Frankszonia can hardly be expected to mourn the passing of Maurice over mush, I mean older Muchkin, ah ... a lot, we did hold a solemn toast to hish pashing ...
I sushi, uh sissy, uh think that a fried corpse will be available to assisht in the defensh of Tipple, Bruder!
(hic)
:)
A

If any assistance is required then myself and my ally Prince Maurice of Fenwick will send all the aid we can. We hope that the Fenwick infantry regiment that stayed after the battle against Stagonia have contributed to assisting with the garrisoning of the town

Many thanks to all who have offered again to assist in the defence of Tippelbruder, should it be necessary to do so. Any news of developments will be posted as soon as we have it...

Tippelbruder's new defences are of the finest local earth, stone and timber, not paper or cardboard - but we shall certainly have a new star fort or two, methinks. ;-)

I hope the solemn toast was to welcome Maurice's descent into the inner circles of Hell, Arthur - I rather doubt he would go to any version of heaven... ;-)

And yes, your Majesty's regiment of Fenwick infantry are well ensconsed in the alehouses of Tippelbruder and it would undoubtedly require an army to remove them now! We are most grtateful for their continued assistance. :-)

Rats often make good pets - much more than could be said for King Maurice, methinks... As Maurice proved, human vermin can beat their animal equivalents anyday (and after all, it is merely a human epithet - no doubt the animals would have pretty derogatory things to say about humans and their appalling behaviour, given the chance).

pp The Town Council of Tippelbruder.

Obviously the contributions from (most of) Europa -I doubt Waldreck took part, e.g.- exceeded what was basically needed to fortify the perimeter! And, being of the honest kind, the Town Council did not divert the funds...

Indeed, the contributions were prodigious and less than 10% has so far been stolen - whoops, I mean dispersed as perquisites or drunk as blandishments to the contractors etc. The Town Council are honest to a man, of course. ;-) More on the new defences very soon (I hope).

Thanks for the comments.